And in the last chapter of our pumpkin saga, we decided to find out what happens when you stack over
100 pumpkins onto a pile of pallets and launch flaming tennis balls at them.

Warning - This video was made with professional operators under the supervision of professionals.
Accordingly, Ventrac insists that no one attempts to recreate or re-enact the activity preformed in this video.

DISCLAIMER: Thank you for all the enthusiastic comments. For those of you concerned about this being a waste of ‘food’, these were carving pumpkins, and not food grade. That said, we at Ventrac are deeply concerned about global food production and hunger related issues. Ventrac makes significant annual contributions to organizations that are committed to helping feed those in need, both in the USA and abroad.


Pumpkin Season - it’s that time of year when pumpkins are nearing the end of their cycle, so why not dispose of them in a creative manner?!

After the success of 100 Pumpkins vs Snowblower and Giant Pumpkin vs Tractor, we asked you, our social media audience, what you wanted to see in 2016. That's when we got the suggestion to "jump them". So here you have it. Can a Ventrac jump a trench full of pumpkins?

Please send us your suggestions for next year in the comments below.

DISCLAIMER 1: Do not attempt this at home or with your own Ventrac equipment.

DISCLAIMER 2: Pumpkins were harmed in the making of this video, but trust us, they were NOT food grade pumpkins.

One Giant Pumpkin. One Tractor. One Victor.


Ever wonder what they do with the giant pumpkins after the fair is over?
See how this 975 pound behemoth met its demise.

What happens when 100 pumpkins go through a snowblower? We wanted to find out too. We took our Ventrac 4500 with a KX523 snowblower and put it to the test. We launched chunks of pumpkins over 40 feet.

Pumpkins are not vegetables...they're fruits
Pumpkins are made up of 90% water
Farmers grow 1.5 billion pounds of pumpkins every year (yes, billion!)
The world's largest pumpkin weighed in at 2,096 lbs
A Ventrac and pumpkins can have a lot of fun together! 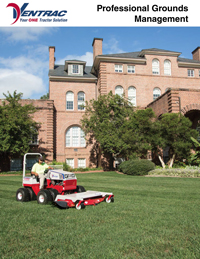