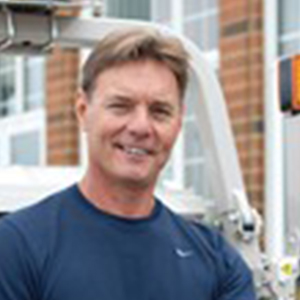 Barry Frey was unaware how his new client would change his life.

It was 2002, and Frey – pronounced "Fry" - was simply looking for clients to add to the roster of his Smithfield PA-based landscaping and snow removal business. But when a local hospital called to inform him that he'd just won the contract for their grounds maintenance, he suddenly realized he needed a new tractor.

"Ice and snow removal was a huge part of this contract," said Frey. "And their grounds are challenging, with steep hills that make people like me think twice about how to maintain them."

Complicating matters was that every winter the hospital would end up with a lawsuit because of an ice-related slip and fall. Frey knew the pressure was on when he started his search for a machine that would fit into the workload created by his business.

"I looked at a lot of different big names," he explained. "but they all came up short of what I was looking for. Then I happened upon Ventrac."

The Ventrac immediately impressed Frey. The ability to quickly change attachments was an important feature, as were the number of attachments available for use. "I've had a tremendous amount of equipment in my lifetime, " he said. "That includes logging cranes and stump removers, blades, blowers. When I saw that the Ventrac had the attachments to handle all of that and then some, I knew it was the machine I had to have."

The first winter with the Ventrac was a trial by fire for Frey. A major blizzard settled over the Smithfield area, keeping him busy running the Ventrac across the hospital's parking lot and sidewalks. The unit's versatility meant he could attach a blade or a power broom on the front end and a spreader filled with calcium chloride on the back. This allowed him to lay the chemical down as soon as the sidewalk was clear, so glaze never had the chance to form.

"As a result, the hospital did not have one lawsuit the entire year," Frey said. "I couldn't believe it. The Ventrac made a hero out of my business."

"My pickups all have seven foot blades on them," he explained, "while the Ventrac blade is six feet. But what the blade lacks in length, the Ventrac makes up for in speed, maneuverability, and visibility. We can get in and out fast, make turns that a pickup can't make, and we can see all around." He added that durability is also an issue. He says that his pickup trucks are all beaten up from the abuse of removing snow, but his Ventracs are all in great shape.

Ice and snow removal was a huge part of this contract, and their grounds are challenging, with steep hills that make people like me think twice about how to maintain them... The Ventrac made a hero out of my business.Barry Frey

Why they are a Ventrac fan

The story might end there were it not for the twist that came next. Realizing the potential in the machines he had bought and having a first-hand understanding of how hard they worked, Frey realized that others must be looking for the same qualities as well. As a result, he decided to become a Ventrac dealer.

His dealership is now a big part of his business life, and he counts among his clients one of the largest universities in West Virginia. He says that his best customers are the ones who own competing machines. "Since Ventrac is small but specialized, when people come in the door they usually don't have a lot to say," he said. "So when you get them in the seat and turn the key, they suddenly gain a whole new appreciation for them because they suddenly realize what the Ventrac can do that their current machine can't."

Frey currently owns a one-acre lot that will become the new home for an expanded Ventrac outlet. "I can see a day coming when I let my other businesses go and become a dedicated Ventrac dealer," Frey said. "It doesn't have anything to do with getting older. I just think that everyone should have one of these machines."